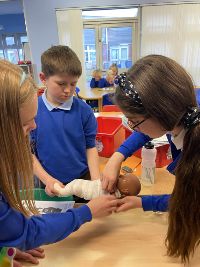 Year six had a fantastic afternoon as part of their Walk like an Egyptian topic. They have learnt about mummification and why the Ancient Egyptians decided to mummify some bodies. They learnt about the whole process, which they were amazed took 70 days. They were also particularly disgusted when they learnt about the hook being forced up the nose to then remove the brain. We also looked at what we can learn from the bodies that were discovered by archaeologists. The work that the children produced today was fantastic, but more importantly, they had an excellent time mummifying the dolls that EYFS kindly lent us.

We are going green! 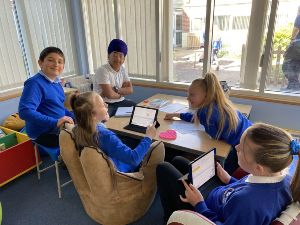 After being inspired by their Earth Day lessons on climate change and the impact it is having on the planet, Year 6 decided they wanted to go green. They have set their sights on the Blue Peter Green Badge so as a class we researched what they needed to do in order to achieve it. There are three pledges that they need to do for 2 whole weeks: switch 30 minutes screen time for outdoor time, sort the rubbish and recycling, and turn off the taps when brushing their teeth. They also needed to choose one more pledge to do as a whole class so they chose to switch all lights and devices off when leaving the classroom. The children were so inspired that they have taken on additional pledges and tasks. Some of the children decided to write to Mr McAnaney to ask him for a section of the courtyard where they could plant and maintain bee friendly plants. Another group of children decided that World Vegetarian Day wasn’t as widely publicised as it should be so are writing a letter to 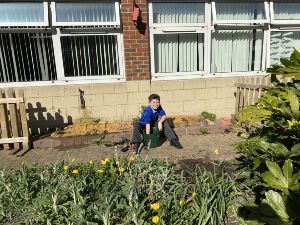 Boris Johnson for his help. All of the groups know how important it is for other children to take responsibility too so they have made posters, videos and power points for younger children to explain how to go green. I am so proud of how enthusiastic the children have been and the work they have put into the project so far.

The Dot - Make a mark and see where it takes you. 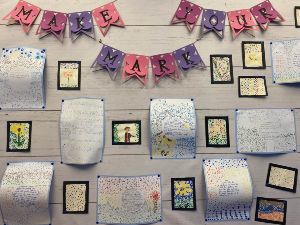 Now that everyone has returned to school after quite a long time away, we wanted to welcome the children back with a lovely whole school project. We read a fantastic picture book called The Dot by Peter Reynolds. The story is about a young girl called Vashti who is very upset and angry because she feels like she can't draw. Her teacher asks her to just make a mark on a page. Once she does this, and after the teacher gives her some encouragement, Vashti realises she can do an awful lot with just one dot. The children used this to inspire their writing. They wrote a prequel, describing what they think may have happened in the art class that day. The children also looked at pointilism art work and created their own versions which they then used to inspire a poem. I think you will agree that all of the work the children created looks wonderful! 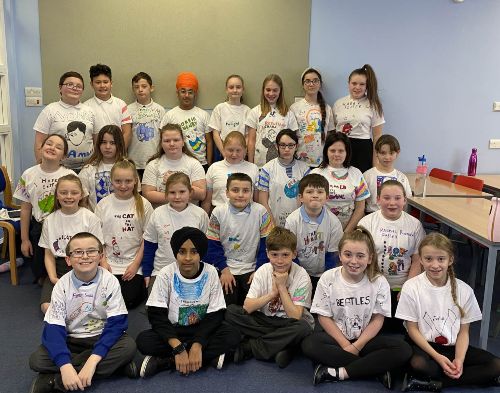 We couldn't have a World Book Day without all of the boys and girls in school so we celebrated a little bit later this year. We also changed the way that we celebrate World Book Day this year. Instead of children coming to school dressed as their favourite book characters, we gave all of the children a plain white t-shirt. Children spent the morning talking about their favourite books and characters, then designed and made their own t-shirts to wear. It was lovely to see all of the children in the school wearing their own designs, and the children had an absolutely fantastic day! 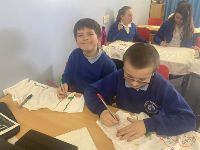 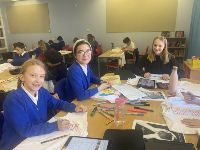 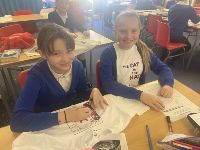