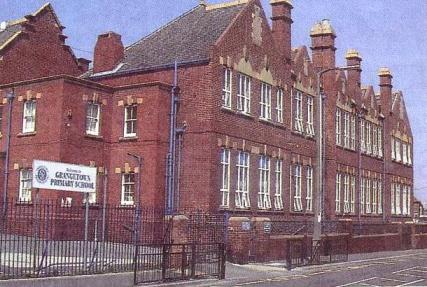 "The two storey brickwork building with ornate stone dressings, faced Commercial Road at the junction with Spelterworks Road, and was divided into infant and junior schools, each with their own entrances. Infants were on the ground floor and juniors on the upper floor." (Dr Rob Shepherd – Just Like It was Yesterday, A History of the Village of Grangetown).

The Log Book entries for the infant and junior schools, recording the official opening days, are here.

Click here to see the earliest photograph we have, taken in 1919 in the infant school hall during what looks like a drama lesson. On the back of the photo, someone has written: 'Student - William Dawson Carr', then the name 'Robyn Mary Carr McGregor' and an address in New South Wales, Australia - presumably a descendant of William Carr? Link to be fixed soon!

In school, we have several log books, spanning the schools very earliest years (starting on the day the school opened - 1 January 1905!), plus photograph albums featuring teachers and their classes from the 1950s and 1960s. For a flavour of these, see our 'A Peek into the Past' page - here - featuring links to just a few of these precious old photos.

In the 1960s, additional 'temporary' classrooms were added to the back of the original building, as shown in the photograph to the right, below.

In 1981 the two schools amalgamated and one school was created: Grangetown Primary School, still occupying the original building. Later, a separate nursery was added, to the rear of the building.

In 2002, work began on a replacement school building, with some of the funding coming from the Back on the Map initiative. In September 2003 a brand new school opened, following the demolition of the old building. The photograph below was taken just before the new building was completed.